A little more than a week ago I uploaded the result of 4 months of hard work: Our Shingeki no kyojin Cosplay video. Within one week it has been watched over half a million times. Words can’t describe how overwhelmed we are. We’re literally speechless! Thank you so much, everyone out there who watched our video and thanks for all the kind words. Some of the comments made us smile like drunken idiots and blush like school girls.
And now, let me tell you a little about the planning and recordings of our project…

Shingeki no kyojin wasn’t the first video I made, but definitely  the most difficult. In the past I made smaller projects. Kuroshitsuji (we didn’t even own our own camera back then and a friend lent us his, haha!), Inazuma Eleven (which was just a random event video without script), Inazuma Eleven Go and finally a very short Madoka Magica one (which wasn’t even planned but made out of random event recordings ^^”).

When I became a fan of Shingeki no kyojin, I thought “Wow, I’d love to make a video out of this but it’s impossible. We couldn’t have titans without looking super silly or badly animated and we can’t fly through the air either. No, it’s impossible!” A month later I thought “You know what? Fuck it, I’m going to do it anyway!” And this is how it started. (≧▽≦)

I told my friends about it and since we were a cosplay group long before the video idea, it was easily decided who will be part of the cast. Oh, and here I have to add some information for those who complained about the looks (or even race or gender!) of some cast members: We are fans of Shingeki no kyojin and we’re friends who are having fun together. I don’t make a “casting” to find the “perfect match” for a character’s role. I’m making videos to have fun with my friends, so deal with it or make it better! (`へ´*)ノ

In the beginning of September I started working on the script. When making videos I try to make the original work as “real” as possible. But I didn’t want to copy the second opening “Die Flügel der Freiheit” (自由の翼) completely. I also wanted to show additional scenes. Some are scenes that appear in the anime and manga, like for example Sasha who rescues the little village girl. Others are made up or inspired by the show, like Mikasa cutting her hair or Armin reading in a book about the outside world. By the way, this is the first scene that I came up with and the first that was finished completely. 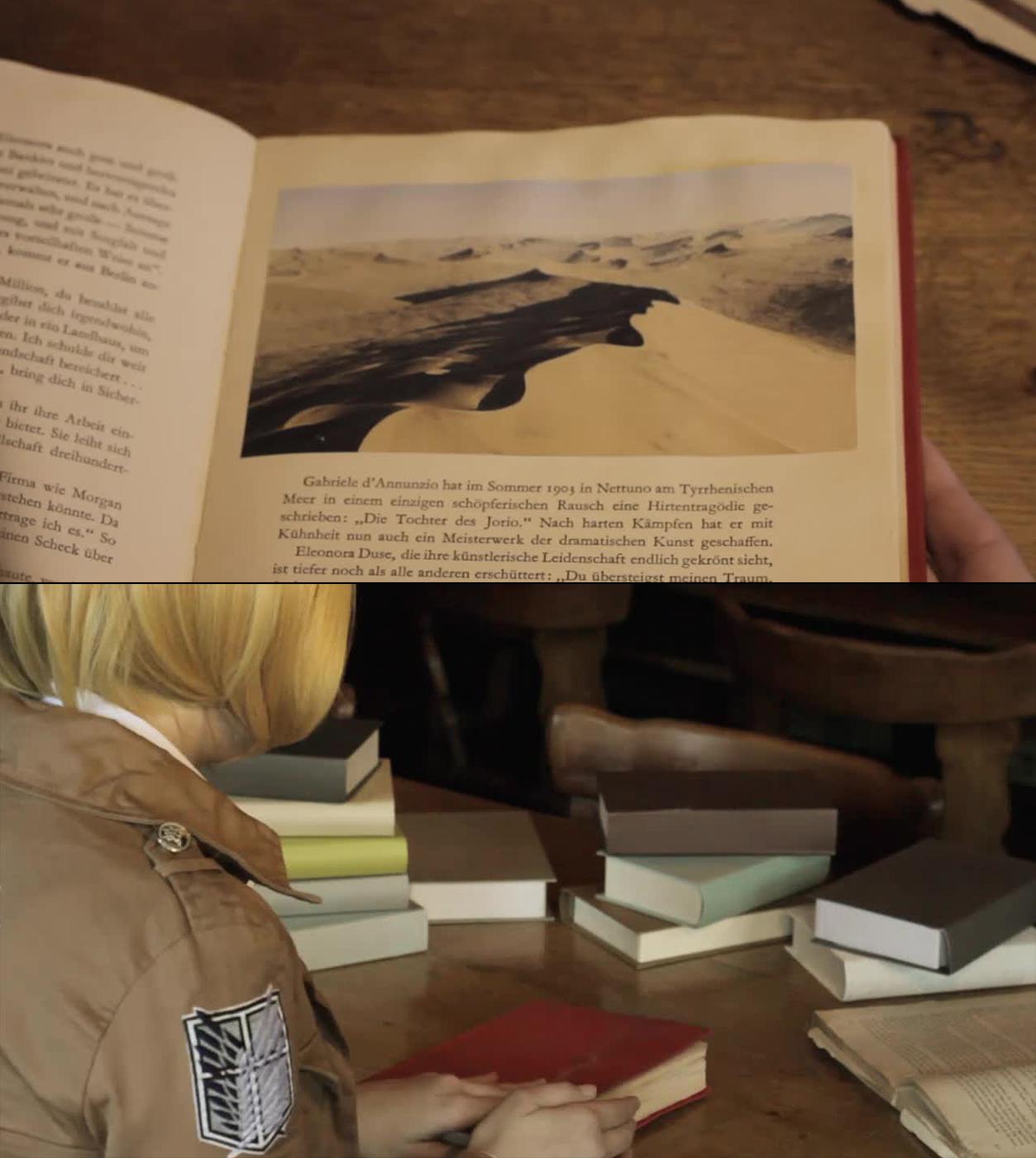 Also in September I started searching for shooting locations. Forests and fields are found easily here in Germany and we were lucky that a friend gave us the unique chance to have even horses in our video. What was more complicated was to find a place were we could even go inside old houses. It required lots of research, tons of phone calls and organisation. I also drove to all the locations beforehand to check them out. That was really time consuming because some were about 2 hours drive from here. Because I was asked many times why there is not more blood and gore in our video: This is because it was not allowed according to the contracts we had with the locations. There are many people in Germany who don’t know much about manga and anime and of course they don’t know Shingeki no kyojin. Now, if those people happen to see our video and there’s a lot of violence and blood in it, it might harm the reputation of the locations. That’s why it was forbidden. But that’s just a little background information for those who are interested. (^.~)

Planning got a little complicated and slowed down afterwards because I went to Japan for 3 weeks and it was difficult to stay in touch with the team as well as the locations. (For example, that one time, the location manager wanted to discuss things with me on the phone and I said “I’m sorry but the time difference! (;A;)” Ha ha, it really wasn’t easy!)

But soon after I came back from Japan we could finally start recording.

We filmed some scenes like for example close-ups of the 3D maneuver gear at home in front of a black background. Some parts were even recorded on my terrace! 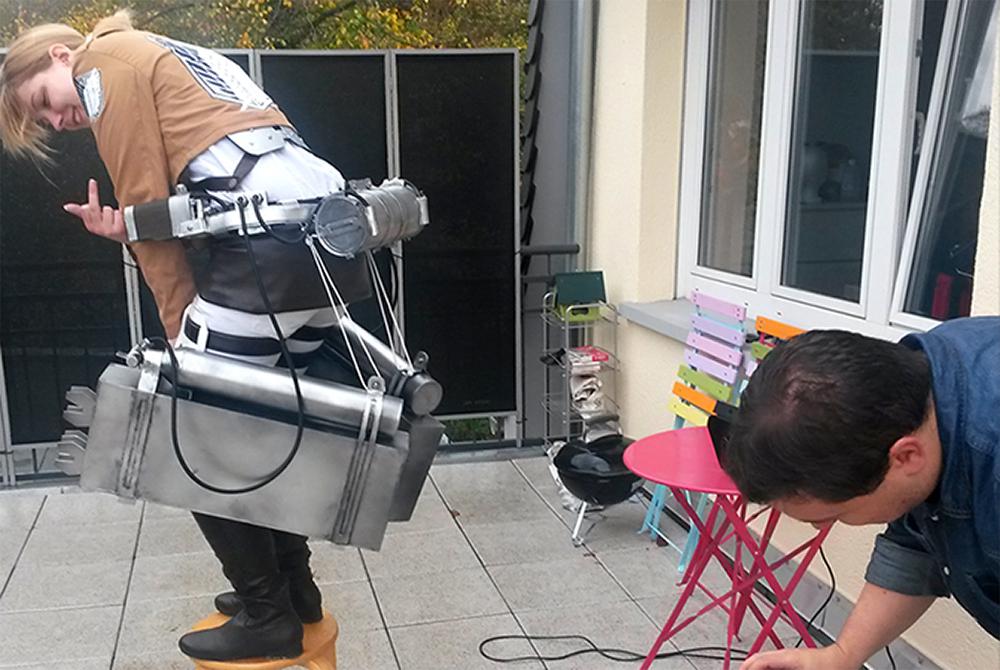 Afterwards, our horse scenes were recorded in Bavaria. Before that day I’ve been sitting on a horse’s back only once in my life and never on such a huge one! And because we had only one day to record everything, we didn’t have much time to get used to it. Our friend helped us getting onto the saddle and explained how to hold the rein and how to give commands and then we had some minutes to get used to it, haha! But it was really a lot of fun and I think I did more or less okay. My horse “Scheppel” and me got along well – apart from that time where he tried to eat a tree! Maybe Scheppel is a vegetarian titan horse! (＞▽＜) 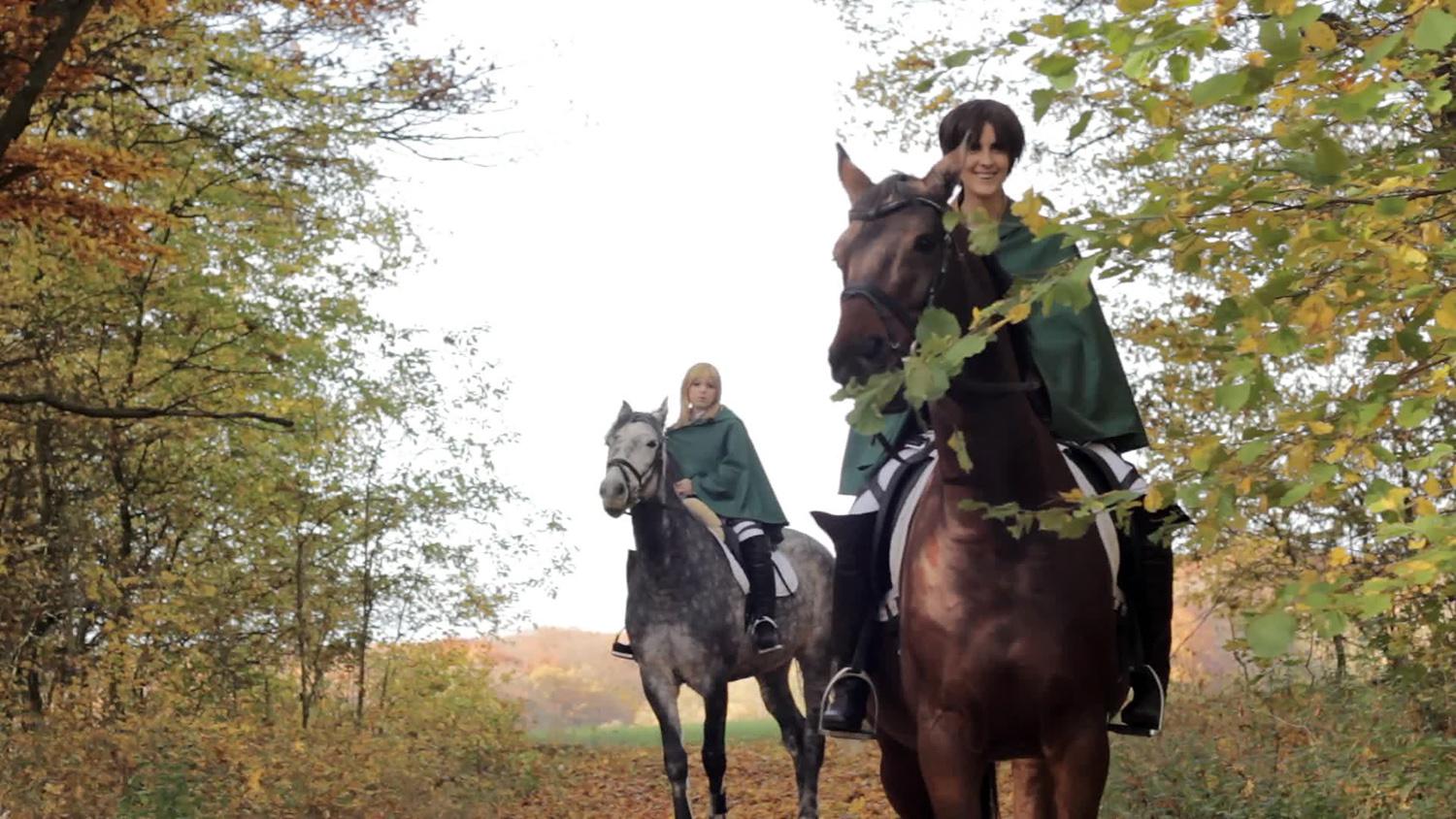 The next big recording was in an outdoor museum in Hesse. We rented the museum while it was closed for public, so we had the whole place for ourselves, which was the best thing ever! The location manager even informed the whole neighbourhood about our recordings so that they won’t be scared when they see smoke rising from the museum. (Because of our fake smoke.) It was damn cold on that day and we got up at 4 or 5 am and finished recordings around 6 pm. It was such a long and stressful day but also a lot of fun and a great experience. 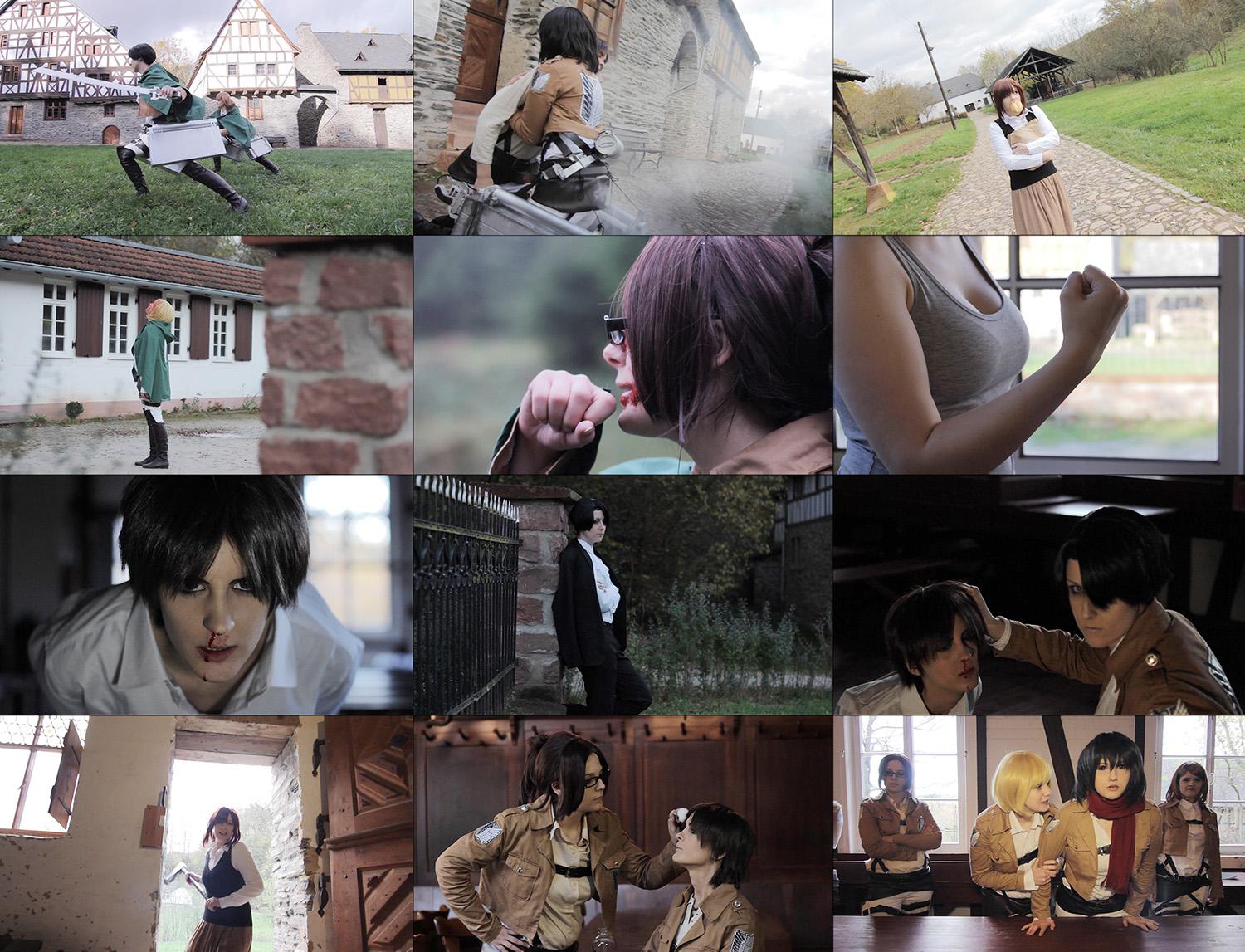 The day afterwards started early again. This time we went to a forest and onto a high mountain. For the end scene I wanted to go onto a high mountain to have a nice view down into the valley. I did find that in the end, but sadly there was so much fog that you couldn’t see much. Ha ha, too bad! This was the coldest day of our recordings. We had sub-zero temperatures and even snow! We were all frozen afer a few hours.

Because of the bad weather we couldn’t finish everything on that weekend. The main reason why the whole project took so long, is because we all have jobs so the only time we had for recordings was during the weekends. During the week I spent my evenings with editing. Some of us also don’t live nearby but several hours away, so a lot of money was needed to travel many times. Mikasa and me spent christmas together so we took this chance to finish the final scenes. Especially the blood on the window was a lot of fun. Just for the cleaning up part we really missed Levi! （´∀｀）

During the months of recordings I already started working on cutting and editing. This really takes the most of the time! There were many weekends where I worked on it through the whole night and went to bed at 7 am. Sleep, what is that? (≧∀≦) There were some scenes that appear for less than a second in the final video but took hours to make. Some people said they didn’t like how I used some background from the original anime. Let me tell you: almost ALL backgrounds you see in the video were NOT from the original but made by myself. （^^） I created them with photoshop. Even the skeleton and the human heart were made by myself and not taken out of the original animation. Drawing and animating the skeleton took me more than 8 hours, so please pay attention to it, ha ha!

So that was basically all. We gathered to make a video just for fun and non of us expected it to become such a hot topic. Now, one week later, there were numorous articles about us on Japanese, US, Spanish and Taiwanese websites and even an interview about our video on niconico, netlab and Yahoo Japan. It’s so crazy! But crazy in a good way because it gives us a lot of motivation and it’s a good feeling that we managed to entertain many people with our video. After all, the main purpose of making it was to spread the love for Shingeki no kyojin.
We also have to deal with lots of criticism. Some people say we’re fat (I hope those people don’t have any eating disorder themselves), others say we shouldn’t cosplay because we’re not Asians (But Shingeki characters are all not Asian. Even Mikasa is only half Asian. I know several half Asian people who look a lot more European than Asian, so what?) or we shouldn’t cosplay as male characters because we’re all girls (crossplay is the most common thing on earth – maybe some people missed that). But that’s something you have to deal with, I guess. There are many people out there who write comments without having a clue of what they’re talking about. It can’t be helped. （^^）”
In the end, the positive feedback is a lot bigger and this is what counts. That’s why again I want to say thank you to all of you guys! We really appreciate your support a lot.

I also added the video to the video section, and you can also watch it directly here:

And a little funny making of here:

Last but not least I want to thank my whole team once more because without them this video wouldn’t exist: 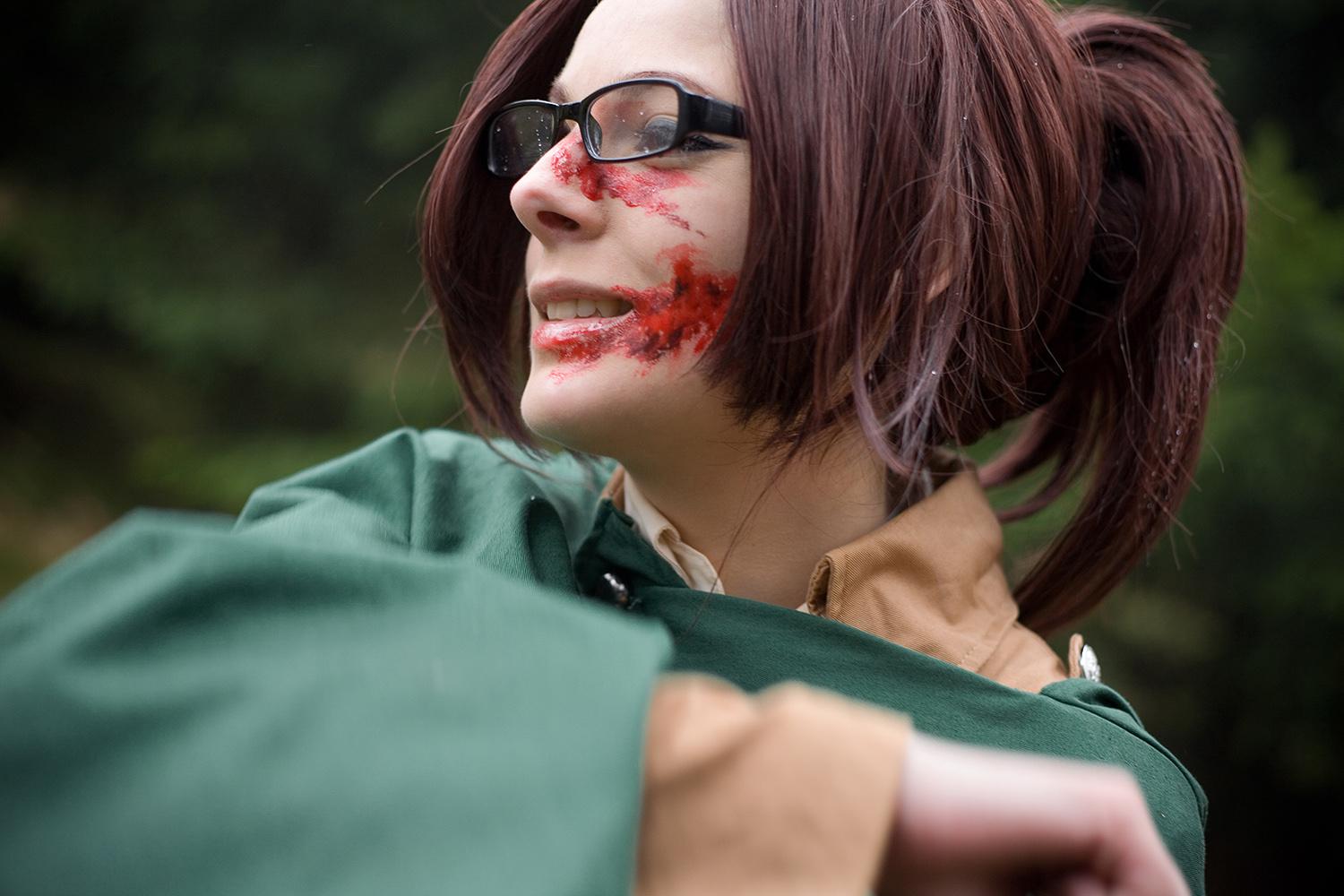 San-Chi as Christa and Sasha 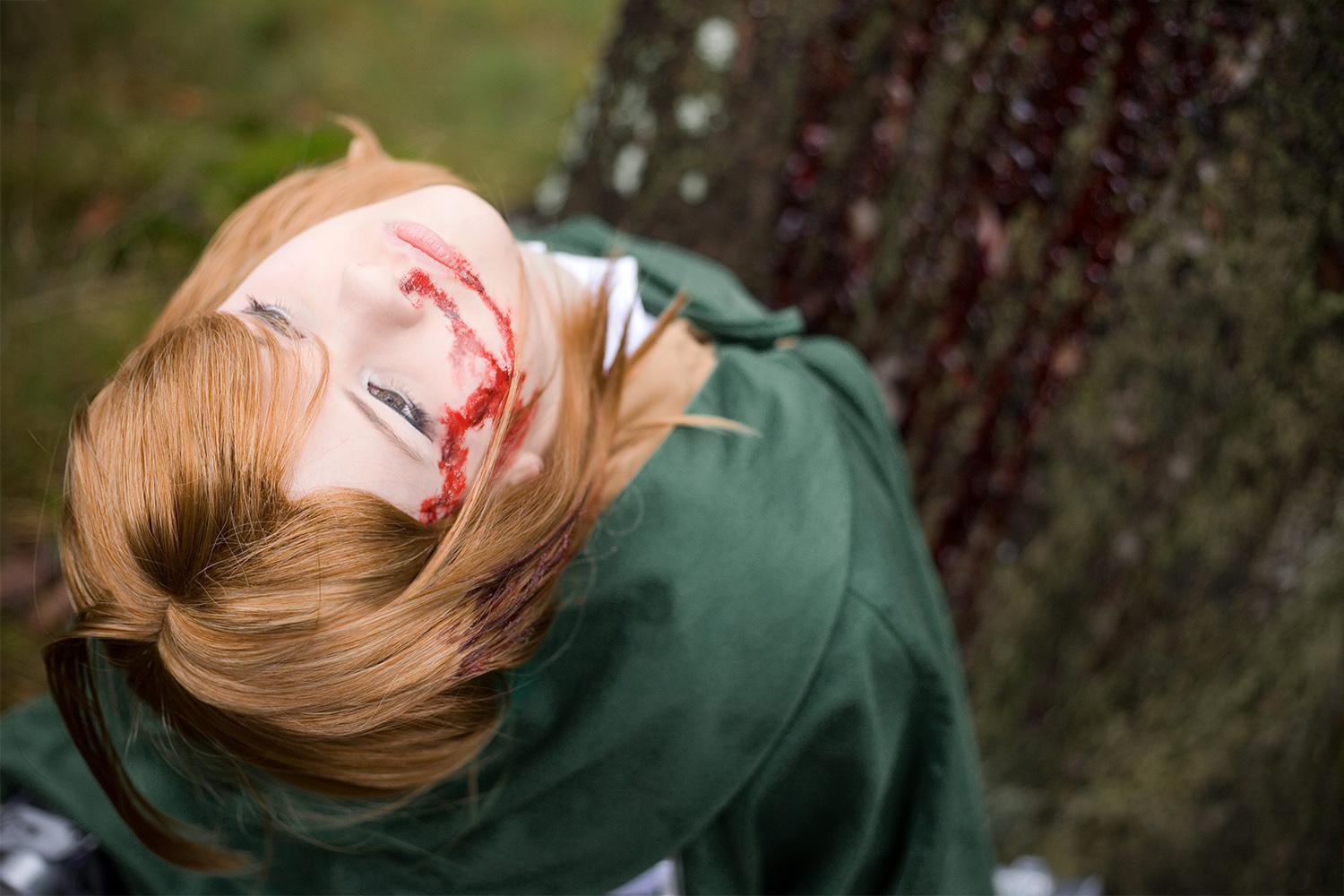 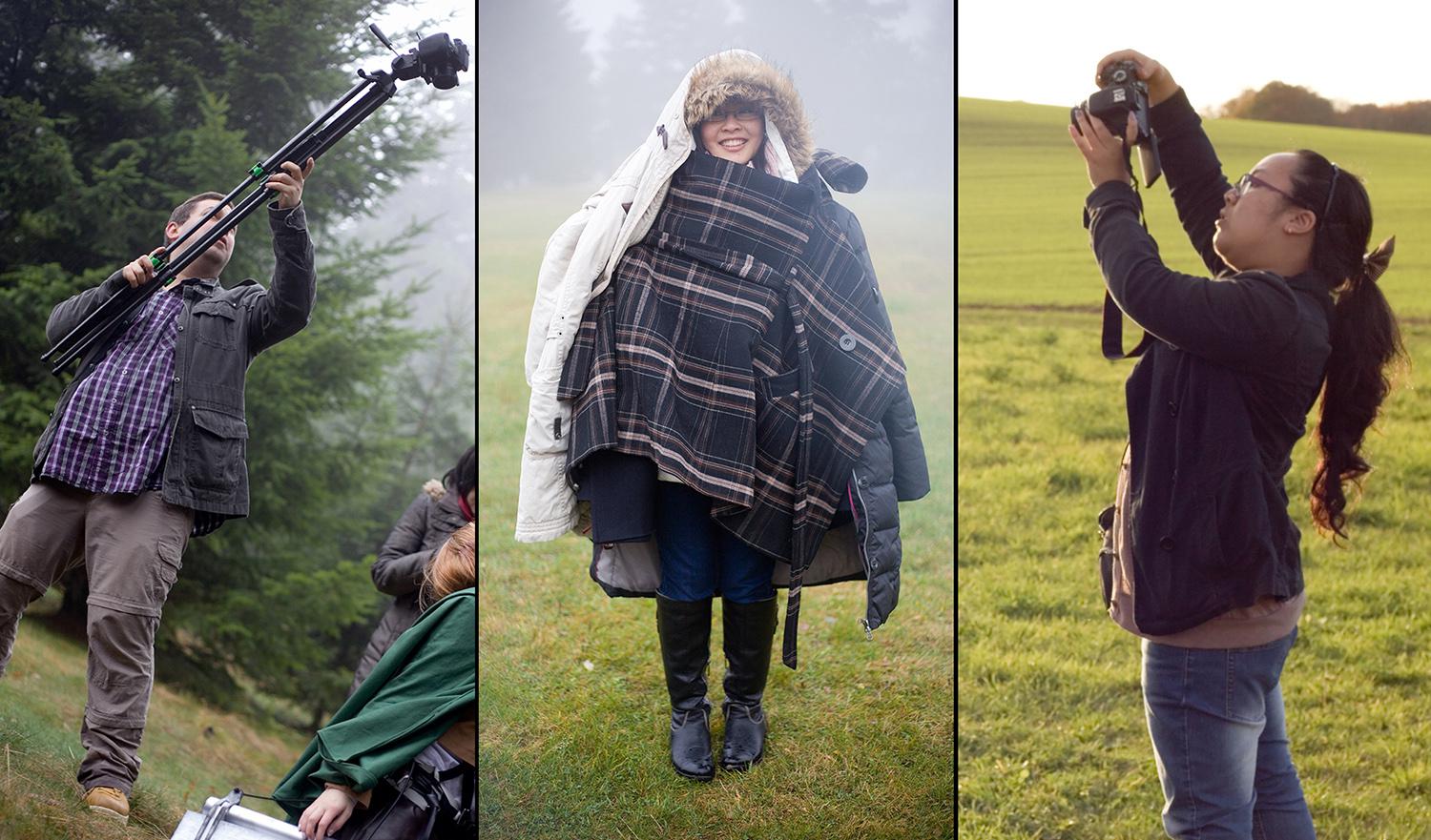 And finally our cameraman Diesel as well as Chikako and Chikara who provided us with food to make sure we won’t starve and who helped and assisted us a lot. Thanks to all of you guys!

Watch me failing! 🤣 I even checked in advance h

I'm so excited to show you this photo! ✨️ It i

Wanted to show you my Nilou cosplay. >///< It will

My fav photo of this shooting. I miss these warm s

I'm happy to show you another photo of my traditio

Some more KoiPro, this time with Neko. Swipe to se

Happy new year everyone! I hope you all had a good

Had this on my phone since aaaages but then I neve

Last set of Eula and Amber. Swipe for some shippin